COVID-19 and the problem with dental aerosols

Dentistry is classified in the very-high-risk category of occupations involved with aerosol production. What does this have to do with COVID-19? Quite a lot. Here is the latest research. 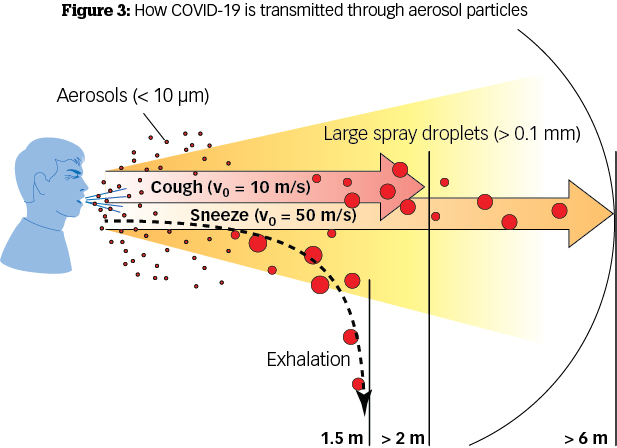 The problem occurs when viral particles are aerosolized by a cough, sneeze, or dental care. In these instances, particles can potentially travel across far greater distances, with estimates up to 20 feet, from an infected person and then incite secondary infections elsewhere in the environment. These aerosolized droplet nuclei can remain in an area, suspended in the air, even after the person who emitted them has left and thus can infect health-care workers and contaminate surfaces. Here are some examples of the longevity of COVID-19 in various places:8

Whenever a new virus emerges, the question needs to be asked if there is a dose-dependent response between viral load contact and severity of the disease. In other words, does the number of viral particles a patient initially encounters, or repeated dosing, determine the severity of the symptoms? One study reported that viral loads in nasopharyngeal swabs from a group of patients with severe COVID-19 were 60 times higher on average than the viral loads seen among patients with a mild form of the disease.9

If this is the case, dental aerosolization may pose an additional threat. Does a patient who has viral particles confined to the nasopharyngeal area become susceptible to aerosol aspiration into the lungs, leading to increased disease severity? This question was inspired by and based on the work of Bruce L Davidson, MD, MPH—a pulmonary physician and researcher in Seattle, expert in respiratory transmission of infection, former president of the National Tuberculosis Controllers Association, and member of the HHS Secretary’s Advisory Council for the Elimination of Tuberculosis—who has extensively looked at aspirational types of pneumonia.15 According to Dr. Davidson, "This very real possibility can be easily diminished by reducing biofilm viral load in the mouth and pharynx region with 1.5% peroxide for 60 seconds, thereby reducing viral load and basically disinfecting the throat. Peroxide drops cornavirus replication by >4 logs. These types of debridement controls are often overlooked." In addition, Dr. Davidson states that nose-covering filters and devices are simple and effective. Of course, well-designed controlled studies are needed to further this research and recommendation.